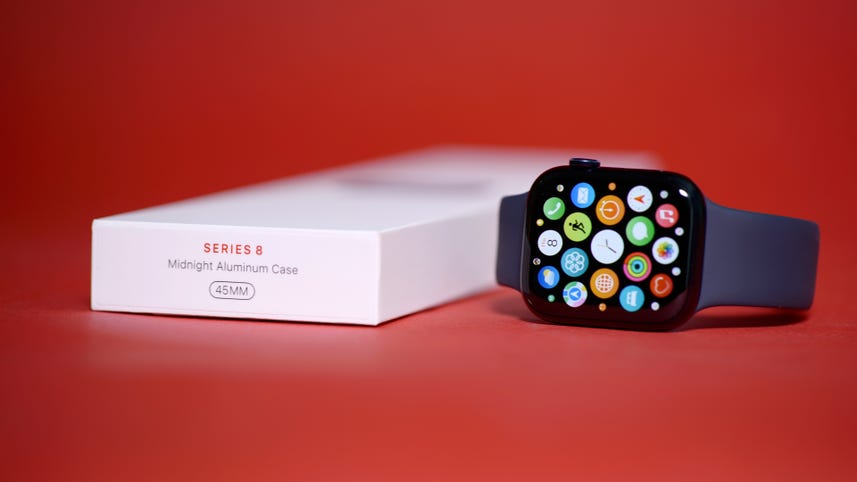 Speaker 1: It used to be simple, picking an apple watch. There was one model a year. Not anymore. The newest apple watch is here. The apple watch series eight, or should I say newest apple watch is there’s also the apple watch se and the apple watch ultra, which do you get? Well, let’s start with the middle one. The apple watch series eight, which I’m wearing on my wrist. The eight is the middle child of the lineup. The se is more affordable. The ultra is the fancy new one. That’s also super ruggedized, more expensive, [00:00:30] and may not be for your wrist. The eight though, doesn’t have that many more features compared to the seven last year. Now here are the two key ones that I’ve been noticing. One temperature. Apple’s talking about temperature on this being a new feature that can help with ovulation tracking and maybe with some other things, but it’s not new to wearables. In fact, I’ve been wearing the aura ring gen three on my finger for the past year, and I’ve been using it to see how my temperature relatively changes [00:01:00] overnight. Fitbits trackers have had it, including the Fitbit sense. Watch Amazon’s halo, fitness bands have temperature tracking and Samsung’s galaxy watch five does as well. But what it does may not be exactly what you think.

Speaker 1: Of all, this type of technology does not do absolute temperature tracking in terms of like, you know what you know, are you a hundred degrees or 98.6? It’s a relative thing that calibrates to you over time. In fact, this watch, [00:01:30] it takes five days for it to even show up, which means that right now, as I start testing, I have no idea what’s gonna happen, but it tells you each night whether the temperature is relatively going up or down. Now, the biggest thing this factors into is for ovulation tracking for women, which is not something that I’m testing, but we will be looking into that. The other thing that it’s going to tell you is in the health app, how your temperature, again, slightly changes, but apple is not surfacing that any more than that for now. So you [00:02:00] can go into the health app and you’ll be able to see a graph of that just for your own personal information.

Speaker 1: Other wearables like aura are using it to calculate readiness scores and give you more of a heads up sense of whether you might be getting sick. Now, again, it’s not a perfect science. It’s very much an estimate, but I did find that some of those wearables will tell me if I’m not maybe feeling that well, or does that match up or should I do something about it? It begins to correlate with things possibly like your resting heart rate or your respiratory rate. There are a lot of directions that apple could [00:02:30] be pursuing with this in the future. I’m sure as it measures, you’ll be able to combine that with things like sleep tracking or other things. It only measures at night. So you have to wear this overnight to get a consistent sampling. That means that you have to wear apple watch at night. And are you the type of person who’s going to be doing that?

Speaker 1: The apple watch series eight battery life is still estimated to be the same as before, which I find is about a day and a half of regular everyday use. That’s not enough for sleep tracking unless you start recharging in the morning. Instead [00:03:00] of at night, there is an extended battery life mode with apple watches. Now this fall that could allow you to get up to 36 hours of battery life. However, it does not allow you to activate things like temperature or heart rate when you’re doing that, which means that you’re not gonna be getting those health stats that you would like for that extra long battery life. It’s a trade off.

Speaker 1: If you wanna get something with even more battery life, apple does offer that. Now that’s called the apple watch [00:03:30] ultra. That’s supposed to offer even more battery life, 36 hours of normal use, but that’s $800 and it is a big titanium ruggedized type of watch. You’re gonna be getting a lot of stuff in that package. Maybe it’s not for you. And that’s the thing about this is that I think temperature is fascinating. I think it’s got a lot of potential, but you do need a longer battery life to make the most of that, or really change your habits. And Apple’s not seeming to be surfacing a lot of super useful information [00:04:00] with this yet, maybe in the next year or two, they could be. Now, the other thing that’s new about this watch is very under the hood. It has to do with the accelerometer and the gyroscope, which apple claims are a lot more sensitive and they’re using it to detect car crashes, which at the moment I’m not planning on doing, but we’ll probably have somebody look into that in the future.

Speaker 1: I’m sure there will people who will be trying things like testing that with car crashes, but that’s a little scary, potentially very useful though. You know, the way this works is it’s supposed to detect [00:04:30] up to 256 G of impact force with the cellar arm in the gyroscope, being more sensitive in being able to notify you when it senses those changes at levels, that it couldn’t sense before that’s useful. But what I found interesting is that it’s supposed to be a better, faster sampling rate for all of that data. Now, I look at that and I think about motion tracking and you know, my mind can’t help, but race to things like motion controllers and things like gestures and well AR [00:05:00] and VR, which Apple’s supposed to be having some sort of headset in the next year or so. That’s a lot of speculation, but you know, it could be very useful for apple to have better emotion trackers in watches and other things in the future to use for those types of devices. Maybe that’s part of where all that’s going at the moment though, that’s not factoring in. It’s just a car crash detection feature on the apple watch. And who knows, maybe there could be more benefits to that in the future.

Speaker 1: There’s not [00:05:30] much else going on with this apple watch. That’s new. The design is the same. The configurations are largely the same. You’re looking at a price that’s starting at $400 going up to 530. If you get the cellular feature on the larger watch size. And then of course you’ve got all of the straps and extra things. There’s a crazy spectrum that goes on with that. And if you’re spending that much for a nice new apple watch, maybe you want to consider showing off with something like the, the ultra, which does have a lot of functional features. Things [00:06:00] like better water resistance. Uh, it’s supposed to have a much brighter display, be more durable. It has higher quality GPS. So that would be my recommendation. If you wanna get a fancy, cool watch to show off, and if you want a budget, watch the apple watch se has a better processor inside, but keep in mind that it doesn’t have an always on display, which I find useful.

Speaker 1: It doesn’t have temperature, but it has heart rate. It doesn’t have ECG, which is not something that everyone’s going to be using, but it has a lot of the basic things. And if the model that is a smaller one with [00:06:30] cellular comes to $300. That’s not as much money to spend, but you can see that apple is creating this big spectrum of price. And unfortunately that spectrum starts at $250 for the se, which is still a lot of money. Now, speaking of money and what you want to do with these things. I don’t think that the eight is a must have upgrade right now. I think that if you certainly gotta watch from last year where the year before, you’re gonna be fine, maybe you wanna wait and see how some of these features bake in the long run for how apple develops its [00:07:00] longer term strategy on health.

Speaker 1: I think there’s a lot of possibilities for apple to finally get two are wearables like Fitbit and aura and others are going to calculate things like well, readiness scores or ambient senses of how you’re doing throughout a day. Apple’s kind of stayed away from that. But I bet they’re gonna probably go in that direction at some point because all of the sensor tech is already starting to get in there, but you do need longer battery life where you maybe need to change the equation a bit more. I think it’s just starting to begin as far as how temperature is really [00:07:30] gonna feel for me in the long run. I’m gonna need to wear this for months to really know. So right now it’s still embryonic, but I’m very curious to see how it evolves, but right now I think it’s okay to wait. And maybe you want to consider what other apple watches in the spectrum you might want to consider, or maybe to stick with the one you have. Anyway, if you have other questions about the apple watch, let us know in the comments below. Do we do these features interest you or are you interested in some of the other ones and make sure to liken subscribe? Thanks a lot for watching.

Pixel Watch: We’re Starting to Piece Together What Google’s Smartwatch Will Be Like

There’s still a lot we don’t know about Google’s Pixel Watch, but its unveiling is likely coming very soon. We’re expecting to get a closer look at…

Fully fledged console games no longer have to be confined to consoles, with Xbox Cloud Gaming letting us bring those games pretty much anywhere we can get…

This story is part of Focal Point iPhone 2022, CNET’s collection of news, tips and advice around Apple’s most popular product. Have you downloaded iOS 16 yet…

iOS 16.1 Will Give Us the iPhone Battery Icon We All Wanted

This story is part of Focal Point iPhone 2022, CNET’s collection of news, tips and advice around Apple’s most popular product. Apple has released two iOS 16.1 developer…